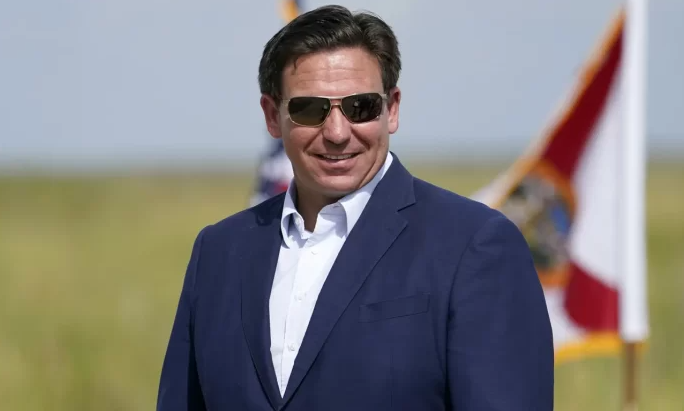 “The [ATC] tower got word that a plane carrying Governor DeSantis was enroute and would be landing in 20 minutes. The pilot said DeSantis would be the only one deplaning. There was no time to roll out the red carpet or prepare a formal welcoming committee,” a JAG source told RRN.

Governor DeSantis is no stranger to GITMO; In 2004, during his second year at Harvard Law, DeSantis was commissioned an officer in the U.S. Navy and assigned to JAG. He completed Naval Justice School in 2005. Later that year, he reported to the JAG Trial Service Office Command at Naval Station Mayport, Florida, as a prosecutor. He was promoted from lieutenant, junior grade to lieutenant in 2006, and served at GITMO under JAG’s commanding officer, working directly with Jihadi detainees.

Our source said that Admirals Darse E. Crandall and David G. Wilson, both wearing civvies, greeted DeSantis on the runway. They shook hands, exchanged pleasantries, appeared to laugh about something, and then climbed in a civilian SUV and were driven to Adm. Crandall’s private residence. The driver remained in the vehicle while they spent an hour inside, probably having an early supper and discussing sensitive topics about which neither our source nor we are aware. Afterward, they travelled to GITMO’s south courtroom, where many Deep Staters have met their fate, and then paused to shake hands with a trio of Marines headed back to barracks. One wanted a selfie with DeSantis, but the governor declined; apparently, he did not want his GITMO excursion publicized on social media, or made a matter of public record.

Their last stop was GITMO’s abyssal heart, the Camp Delta detention block, former home to Jihadis and current dwelling place to Deep Staters awaiting tribunals or serving life sentences for committing treason against the Republic. A uniformed Marine escorted the admirals and Gov. DeSantis past a dozen sentries patrolling the perimeter and inside the 15’-foot-high chain fence topped with razor wire angled inward. Of GITMO’s four fortified structures, the admirals and their guest entered only Camp 1, an impregnable fortress made of cement and stone that has approximately 340 six-by-nine-foot cells.

Our source, who viewed the governor’s tour from a distance, could not enter the camp and does not know whether DeSantis spoke to any detainees. He said they were in the Camp about 30 minutes, after which the governor returned to the airfield for his flight home.

In closing, this is the first time in a long time, at least as far as we know, that a politician has been granted access to GITMO’s inner secrets. President Trump had attended at least one Deep State execution, but that was well over a year ago. As reported previously, certain elements among the White Hat partition of the U.S. military have had feelings of confliction regarding Trump’s ability to fully drain the swamp and mend a fractured nation. JAG, however, has stayed neutral, saying its responsible is to prosecute prisoners, not adjudicate the political fray. If JAG has picked a side, it could indicate a fundamental shift in the White Hat movement.

DeSantis’ unscheduled trip came a day after he campaigned in Pennsylvania and Ohio for two fellow Republican candidates in critical races.

RRN is an independent publisher that relies on reader support. Help us reach our Annual goal. We fight for truth and freedom of the press in an oppressed society. We use GiveSendGo, a Christian-based fundraising company, through which to collect donations. Please do not give your hard-earned money to sites or channels that copy/paste our intellectual property. We spend countless hours vetting, researching, and writing. Thank you. Every dollar helps.
GiveSendGo Fundraising Link.

NIKOLA TESLA VS THOMAS EDISON’S PREDICTIONS FOR THE 21ST CENTURY

MONKEY WERX Flashbang at the Vatican

Douglas Macgregor: Part 1 – How Will This War End?

Douglas Macgregor: Part 2 – How Will This War End?

IS JUSTICE FOR SETH RICH FINALLY HERE? The Fixx – One Thing Leads To Another.

(Scotty Mar10) The Fixx – One Thing Leads To Another.

(I INSERTED THE PHOTO OF PRESIDENT TRUMP AND FIRST LADY MELANIA, ANNOUNCING THEIR RETURN! IL DONALDO TRUMPO (PRESIDENT TRUMP) TRUTHED IT THE OTHER DAY, SO I SAVED A COPY! – LM)

Denmark just opened,, on the same day as the Nord Stream explosion, a new pipeline from Norway to Poland. COINCIDENCE IS AMAZING: NORWAY-POLAND BALTIC PIPELINE OPENS STRAIGHT AFTER NORD STREAM IS SABOTAGED” https://www.bitchute.com/video/2oYacENpCu2Z/

Actually, this is the Danish company benefiting https://en.energinet.dk/About-us/Organisation/Executive-board
well there were NATO/US training exercises in proximity of explosion NATO/US Military trained near the Nordstrom explosion https://twitter.com/ClimateAud….it/status/1575114216 (Twitter Account no longer valid – LM)

Couldn’t be more obvious. Poland/Denmark needs to be taken to court. Actually, this is the Danish company benefiting https://en.energinet.dk/About-us/Organisation/Executive-board

However, Alex Christoforou said that the Baltic Pipeline is only supplying a very small amount of gas, so “it is a joke”. And the real motive is for NATO to go in and protect the Ukrainian (Biden) gas…

FOC Show: LIVE with Juan O Savin | Who BOMBED Nord Stream 1&2? What’s Next? How does it affect you?

Tuning into God’s Rock and Roll ~ Episode #2 ~ The Storm is Upon Us, Christ is On His Way…

A long, beautiful Show from Charlie Freak and his Clan of Spiritual Patriots. They think on such a deep level and display their insights through decoding the deep, hidden meanings in the Lyrics of the Music of the 70’s, which I can relate since I was a High School Grad of ’74 and that was my Party Music. A Blast from the Past with the Lyrics explained in a way I would have never imagined. I never paid much attention to the lyrics of songs when I was young, so this is very exciting to know the Truth has always been right under our noses. Enjoy! – Laura Mae

Tuning into God’s Rock and Roll ~ Episode #2 ~ The Storm is Upon Us, Christ is On His Way…

Tuning into God’s Rock and Roll ~ Episode #2 ~ The Storm is Upon Us, Christ is On…